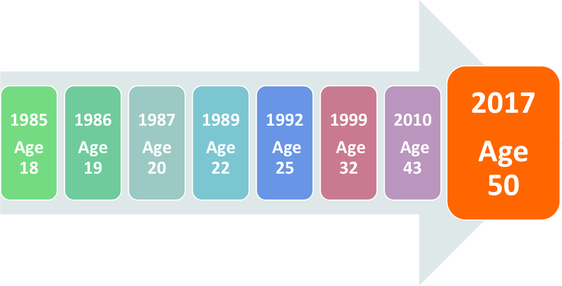 The Edmonton Transitions Study (ETS) was started by Drs. Harvey Krahn and Graham Lowe in 1985, who began with an initial survey of 983 graduating high school seniors in six Edmonton public high schools. The goal was to investigate how these seniors made the transition from school to work after having experienced their teenage years in the midst of hard economic times. Followup surveys were completed in 1986 and 1987. We discovered that transitions from school to work were taking longer than expected, so to better understand this transitional period, two additional surveys of the same participants were completed in 1989 and 1992.

The study eventually became a study of youth-to-adult transitions, so participants were surveyed again in 1999, at age 32.

Through the years, the Research Team learned a great deal about transitions to adulthood [see our Publications and Media pages], but middle age has been understudied in general, so we embarked on a 25-year-anniversary followup survey - when participants were age 43! This made the ETS an impressively unique study in Canada.

In 2017 we conducted an age 50 followup survey - making this a 32-year longitudinal study - a rare investigation indeed. We located as many of our original high school graduates as possible and are very excited that 404 helped us to learn more about their work, family, and personal experiences as they moved further into midlife!
​